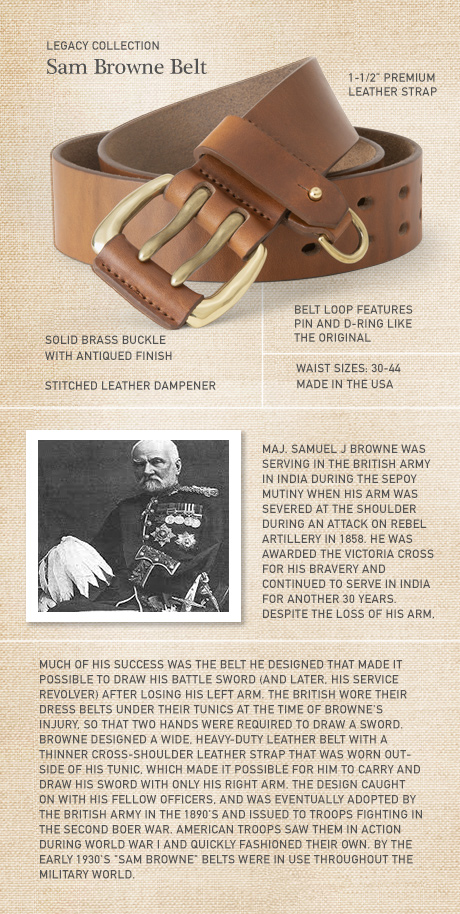 SOur Legacy Collection "Sam Browne" belt is a recreation of the original Willis & Geiger offering – which was modeled after the early military versions, minus the cross-shoulder strap and saber scabbard. Made in the USA, it features a 1½" harness leather strap with a solid, antiqued-brass, double-pronged buckle, leather dampener and – true to the original – a leather keeper with a D-ring to carry keys, a compass or other small accessories. It’s 1½" width is ideal for carrying a hunting knife, holster, compact binocular or eyeglasses case, or a belt-style cell phone holder.

Who Is Samuel Browne?

Maj. Samuel J Browne was serving in the British Army in India during the Sepoy Mutiny when his arm was severed at the shoulder during an attack on rebel artillery in 1858. He was awarded the Victoria Cross for his bravery and continued to serve in India for another 30 years, despite the loss of his arm.

Much of his success was the belt he designed that made it possible to draw his battle sword (and later, his service revolver) after losing his left arm. The British wore their dress belts under their tunics at the time of Browne's injury, so that two hands were required to draw a sword. Browne designed a wide, heavy-duty leather belt with a thinner cross-shoulder leather strap that was worn outside of his tunic, which made it possible for him to carry and draw his sword with only his right arm. The design caught on with his fellow officers, and was eventually adopted by the British Army in the 1890's and issued to troops fighting in the Second Boer War. American troops saw them in action during World War I and quickly fashioned their own. By the early 1930's "Sam Browne" belts were in use throughout the military world.