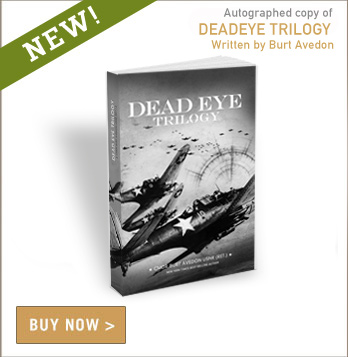 At just 92, Burt has completed an outstanding recount of adventure, war, flying, african safari and life. Names have been changed. You can perhaps guess the name of the actual pilot who did that crazy maneuver (they used it in the film, TOP GUN) to rid himself of an attaching aircraft close on his tail, by jamming on full flaps to stonewall his F-4 Phantom into a near halt from 600 mph in mid air and drop it down so the attacker shot past overhead and now became prey! It was so risky in fact that the Naval Air Command tried to have all mention deleted from the records so no other young hot shot would try it. The young pilot’s comment when he had pulled it off: “Gotcha!"

As Reviewed By Kate Decker
“Every event in this riveting three part book actually happened. Told as a fictionalized account, the feats of daring and selfless courage of these young WWII pilots – the guys who landed on the pitching decks of aircraft carriers in the Pacific in all kinds of weather, and who fought dogfights in the air against the enemy – are all true.”

“Pre-publication readers of the Deadeye Trilogy, including military veterans, and historians of WWII, have called this trilogy “Utterly authentic,” “Edge-of-your-seat thrilling” and “Packed with lore and history of the actual day-to-day life of these incredibly brave young American pilots.”

This is a must read for anyone interested in WWII history, or who just wants to read a rousing (and true) story of incredible adventure, with its successes and failures, up against some scary odds. In the end, these guys emerged victorious and all of us owe them a deep debt of gratitude.